Coronavirus: When and how could hair salons reopen in the UK? 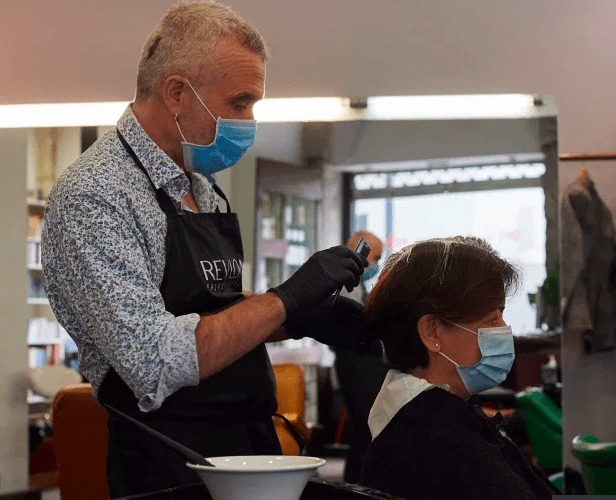 Some European countries, including France and Spain, have already allowed people to start visiting salons again.

Foreign Secretary Dominic Raab told Sky’s Kay Burley @ Breakfast that salons will not be opening until 4 July “at the very earliest”.

“Obviously the proximity [within salons]… is something where we just don’t think we are ready yet, given where we are with the virus,” he said.

According to the government’s 50-page plan for easing the lockdown, hair salons will be back in business in the “late summer”.

The government clarified the rules for hairdressers after many expressed confusion following the prime minister’s speech on Sunday, where he declared that anyone who cannot work from home should go into work.

But it seems many will not be able to fix their lockdown cuts for some time, because hair salons come under phase three in the government’s three-phase plan to easing lockdown.

Phase one says that people can return to work from Wednesday if they can’t work from home, however, those people would include builders and those who work in manufacturing, and not hairdressers.

A full list of who is being asked to go back to work this week will be published later today, but hair salons come under phase three, along with pubs and restaurants.

Phase three isn’t expected until at least 4 July, after phase two, which is when children may be allowed back to school.

Sky’s political editor Beth Rigby said hairdressing and beauty are “challenging sectors because of the level of contact required between the client and the hairdresser”.

A number of European countries have begun reopening salons as part of the first stages of easing lockdown restrictions – but they have strict rules in place.

In France, salons will not accept walk-in clients and everyone will be asked to wear masks and gowns and use hydraulic gel, disinfectants and disposable gloves.

While Britain’s salons have remained shut since 23 March, hairdressers have been warned not to offer home visits.

The National Hair and Beauty Federation (NHBF) said hairdressers and barbers should not be providing haircuts until the government gives the go-ahead.

In a letter to members last week, it said: “This would be against the government’s strict social distancing instructions which say you must stay at home apart from essential travel.